A writer should write what they want to write, and write it how they want to write it. This is a theory I have expressed before, and one I will continue to express. I am aware that some may disagree with me on the subject. They will tell me that you should be writing to an audience, and you should stick to this golden formula, or that golden rule etc. Self-help guides and novel writing courses are full of golden rules. As are the majority of ‘How to succeed as a writer’ posts on Faceache. Which almost always is trying to get you to buy their ‘How to succeed as a writer‘ guidebook for $1.99 on kindle…

One of the ways to be successful as a writer as far as I can gather is to write a ‘How to succeed as a writer’ guidebook and advertise it on every Facebook group in the known universe, five times a day, three hundred and sixty-five days a year. The reason this must be a formula for success is because the one selling those books are always ‘BEST SELLING AUTHOR’ Joe Blogs. Who much to my surprise, when I go and look them up, appear to have not written any books other than ‘How to succeed as a writer’…Which is fine, though I personally don’t feel I should take advice on writing a novel from someone who has never written fiction…

Unless of course ‘How to succeed as a writer’ is actually a work of fiction, which would explain a lot…

Here is the thing, the kind of advice offered in these books I have always found to be patronising at best. They are based, as all such ‘self-help’ books are, on the concept I alluded to above. That being that there is some golden formula to writing a novel. A set of rules, that if followed, will produce a masterwork. In turn, by following the rules, you will, according to the blurbs:

‘Sell thousands of copies, be lauded by all. You will indeed go on to win awards and be able to write books  as successful as ‘How to succeed as a writer’  by the award-winning, best-selling writer Joe Blogs. Just follow these golden rules…’

On the off chance, you’re reading this in the hope of discovering the golden rules, which as I have a certain degree of faith in my readership I suspect is not that case, allow me to clarify my position on the golden rules by deferring here to the wisdom of W. Somerset Maugham. 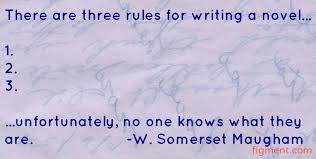 You may not have heard of him before, you may never have read any of his novels, but Maugham wrote some twenty very successful novels, numerous short stories, plays and is undoubtedly, therefore, a man whose opinion carries some weight in this regard.

(Confession time, I knew him only from the quote, until I decided to dig around and realise he wrote ‘Of Human Bondage’, which has been on my ‘classics I should read‘ list for years, despite me not knowing the author’s name. Which says unfortunate things about my literary education.)

So, there are no rules, there are certainly no golden rules, and I guarantee any advice you are given by anyone on the subject is flawed to one degree or another. I include my own advice in that, I am not claiming to be any authority here. But I am fairly convinced that the one place you almost certainly will not find ‘the golden rules’ is between the pages of ‘How to succeed as a writer’  by the award-winning, best-selling writer Joe Blogs, because what those books mostly focus on is ways to game the market…

They will generally tell you to do one of the following as its where the money is:

Or you could just write a story, see where it takes you, and write what you want to write. I say this because if you want to write fiction because you want to make money. If indeed your sole aim in writing books is the money that could be made by doing so. You’re making a big mistake, and coming to the craft from entirely the wrong angle. Believe me, there are far easier ways to make money than writing books. Except perhaps ‘How to succeed as a writer’  self-help books because given the sheer number of them out there someone must be buying them…

Now I am not saying you should not write a  ‘teenage paranormal, dystopian fantasy with werewolves‘ if that’s what floats your boat. In fact, if that’s what you want to write, if it sparks all your imaginative neurons and gets you to the keyboard then you should do just that. Just because it’s popular is no reason not to write it. Any more than writing ‘50 shades of grey‘ clones is something I would sneer at if that’s what someone really wants to write ( Please for the love of all things small and furry write something better than the original garbage though.) Here is the thing, as a writer, I write best when I am into what I am writing. When I believe in what I am writing. When I am writing what I want to write and saying it just how I want to say it.

I am sure, due to having spent many years writing one word after another in some form of coherence, that I could turn my hand to writing anything. The basic craft, the construction of sentences, paragraphs, chapters and telling a story, that is something you can learn. No really, for those who doubt this, it is. Write a few hundred words every day, write a million or so over the years. Eventually, you’re going to start getting it right. Eventually, you’ll be able to figure out how to tell stories and make them reasonably professional. So having done that I am sure I could apply the craft to ‘teenage paranormal, dystopian fantasy with werewolves’ or ’50 shades of turquoise’ and in doing so create something that is probably sellable. It would be soulless, and a sham, but I could do it. But I would hate myself, begrudge every word, and it would show in the final print. It would be writing by numbers.

Writing is more than just the craft of writing, writing is putting a slither of your soul on the page. My best work is always the work I believe in. It comes from deep within. It means something to me that no reader could ever grasp, and yet they will recognise that when they see it. More importantly, they would recognise its absence, even if they could not tell you what was missing.

So if there is a golden rule, it is simply this, write something you believe in. Write what you want, how you want. Perhaps you will not find an audience, at least, not an audience as easily as you might with 80000 words long ‘teenage paranormal, dystopian fantasy with werewolves, book one of the howling angst teen chronicles’  the self-help books are not entirely wrong on this score. But when you find an audience they will actually believe in your book, your world, your characters, because you do.

Other posts on writing and self-publishing are collected here:

4 Responses to Writing Novels: The rules