The Impossible Search for the Perfect Sentance…

Occasionally writing becomes the search for the perfect sentence, this can sometimes become an obsession, and like all obsessions, it has a dark side. That may seem a strange thing to say, but you’ll have to go with me here to understand what I am getting at. Just as my 1000 a day habit cured me of apathy, and a degree of procrastination, the change of approach and the discipline it required also highlighted to me another issue I had with writing, the constant unerring drive to edit.

Now don’t get me wrong, editing is a vital part of the process, show me any writer who claims they don’t need to edit and I will show you a liar. We all do it, to one degree or another, and more than one of us is obsessive about it. Terry Pratchett, the father of Discworld, was known for ‘fiddling’ with his text right up to the point of no return when his publishers sent a novel to print. When asked in an interview why he did this he replied, “It’s hard to let your children go out into the world.” he is not the only one, it’s a sentiment repeated by many authors.

Editing can be incredibly creative in its own right. Another Terry story, this one told by Niel Gaiman, occurred when they were writing ‘Good Omens’ together. Niel wrote a passage and sent it to Terry, and the next day received it back with a note from Terry saying he had added six words to the passage and made it 33% funnier…  A little sub-story telling the readers a little about a passing characters life, and how he used to lay on the grass with his then-girlfriend and spooned in the sunlight beside the canal. To which Terry had added the words ‘and on one memorable occasion, forked.‘ Which is about as perfect a sentence as is imaginable in the context of the tale been told.

As Stephen King has wittily said… 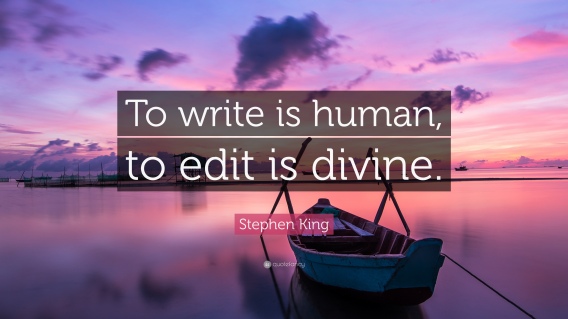 Therein lay my problem back in the days before I made a conscious effort to change my approach to writing and embark upon my 1000 a day habit. Quite apart from my procrastinations, and general willingness to be distracted, I was obsessed with the search for the perfect sentence, and in that quest, I would find myself mired in an ‘edit as you go’ mentality. To give you an example, I actually rewrote the first three chapters of ‘Passing Place‘ about thirty times over the course of two years, while (and this is the important point) not making any headway with chapter four. It is a problem which I share with other writers. The desire to make every word sing, to make every sentence a perfect sentence, before moving on to the next, only to open up the document the day after and find it is all so much drivel to your jaded eyes and start over once more.

I had a conversation with another writer on Facebook the other day, which was sparked by a message about a previous post, but mainly by the quote from Neil Gaiman below…

The argument put forward by the other writer was, in essence, “Yer, but then you spend hours editing it and get nowhere.”  Which was a reasonable enough observation, but when we spoke about it a little further the crux of his problem came to light. He, much like I used to be so often, was stuck in a first draft. Ever reworking a few thousand words in search of a perfection that was at best a pipe dream, if not utterly unattainable.

Let us take a moment and consider why perfection is unattainable in a first draft, there are a couple of reasons that spring to mind.

My advice to this writer, based on my own experience, was to write rather than edit. That is, rather than seek the perfect sentence just write, and keep writing. If you go back to the previous day’s work, something I always do, just read through the last couple of paragraphs or so, tinker if you must for ten minutes. Get it out of your system. Then push on with the writing. Write it through, and get that elusive first draft finished.

This is what I did with ‘Cider Lane’. It’s how making myself write 1000 words a day became a novel, because at some point I found my flow and a story I needed to tell, so I told it to the audience I had to please first above any other, myself.  In all, I was writing a lot more than 1000 words a day when I was in full flow. The first draft that came in at 65000 words I wrote in a little under a month, and sure then the editing began, and the search for those perfect sentence. But it is a hell of a lot easier to find those perfect sentence when you at least know where they are leading to. By the time you have finished your first draft you know your characters, you know how they think, how they react, and where their story is going. Which matters, because, the perfect sentence is a sentence in context. When your characters speak, the words need to be spoken as they would speak them. In the same way, your narrator’s point of view will infect the way a sentence is written, and a perfect sentence is only perfect if it conveys what you really want it to.

James Joyce was a man who sought perfection with words in the first attempt, he was its fair to say better at it than most. He famously would consider it a good day’s work if he got a whole sentence down, provided it was the right sentence.  I am not James Joyce, however, and I know I will edit myself into extinction if I let myself do so. Better I find to leave editing to the second draft.  My way is not necessarily the best approach for all. It just works for me, but I will champion it all the same, to anyone lost in the quagmire of first draft editing and the endless search for that elusive perfect sentence.

So if you find yourself in editing hell while working your way through draft 1, stop editing, just write and keep right on writing…

Of course, once you start writing draft 2 its basically all editing and all bets are off. That’s the time to seek the perfect sentence…

Other posts on writing and self-publishing are collected here:

Like Loading...
This entry was posted in publication, self-publishing, writes, writing and tagged #amwriting, writing. Bookmark the permalink.