The value of the craft…

How do you value the results of your craft?
It’s one of those questions that’s always hard to answer, and harder to answer as a writer than, to give a random example, as a carpenter.

So how does a carpenter figure out the value of his craft. Well, lets say he makes a table. He cuts the wood, joins the pieces together, sands down the rough edges, lays on a few layers of varnish, then polishes it all up. Then having made the table he can add up the cost of the materials, and having ascribed some base value to an hour of his life, figure out how long he spent making the table and do an easy calculation. All he needs to do then is add a reasonable percentage on top and voila he has his value and he can look to sell his table at a price that reflects its worth. If he is a highly skilled craftsman making bespoke furniture he’ll charge a little more, because people can see the value in his work, but ultimately they are always paying for a singular item with a solid as you like cost determined by factors that are easy to calculate.

But I’m not a carpenter… I’m a writer, and for writers, like all artists, value is a more complex thing to determine. How exactly do I ascribe a value to the product of my craft? Ironically a lot of this comes down to the nature of the thing we create. What is written is singular and unique but the way it is marketed it is not. If you add up all the hours spent on thinking about, writing, editing, researching, redrafting, proofing, final editing, reproofing and everything else that goes into creating a novel its comes to a big number. In the same time, our friend the carpenter could have made a fair few tables I would posit, or at least made one a very beautiful and very expensive table. A novel can take a year, or several, to write between the first word being typed on the screen and it reaching the point its ready for publication. As I say, add up all those hours and you get a rather large figure. One which a reader does not as a rule see, hence the iceberg… 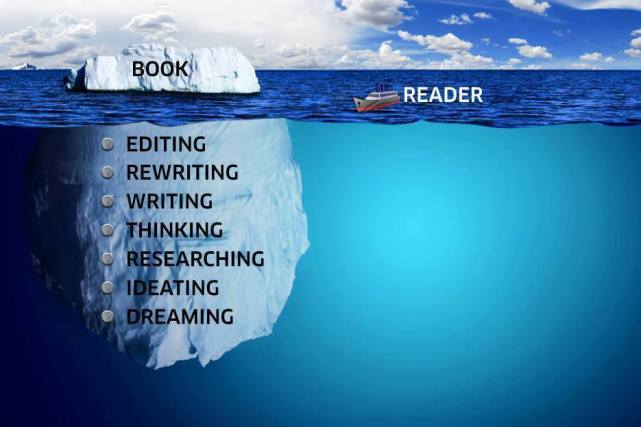 For most writers the craft of writing is a labour of love, it has to be as most of us don’t write to make a living, truly professional novelist are few and far between because you need to sell a lot of books to replace your job, and for most of us that’s not going to happen any day soon. (see Fiscal realities of publishing and the pursuit of happiness, and the resent follow up post if your interested in the heard facts…)  but that doesn’t mean I do not want to be paid for my work as a novelist, sure it’s not how I pay the mortgage, but fair recompense for the work I put in would be nice. However, as I was saying, it is hard to ascribe a value to the craft of a novelist.

To begin with a balance needs to be struck between finding new readers and a fair return for all the work involved. Unlike the carpenter, you can’t just add up the hours you have spent, ascribe a figure to each hour and calculate it form there. A novel is a singular item, but it is not sold in the singular, a novel by its nature can be sold to more than one person, a novelists words are not carve into a stone tablet, but printed in ink on paper and bound into books. Luckily, we can figure out the cost of paper and ink easily enough, print on demand sites will tell you exactly what the minimum price you can ascribe to a any given paperback is, so its just a matter of striking a balance between that, what you think each book should cost, and fixing a price you think is fair, reasonable and that most people will be willing to pay. But paper backs are one thing, the market place for novels however is not just paper and ink, in fact for the indie author in most cases E-books are the main marketplace for the new and aspirating. E-books which bring their questions of value to the table. While a paperback is at least a physical things Ebooks are just binary strings of ones and zeros that form a readable text. When you sell an Ebook your just selling a code, a code of which you have a never ended supply. Which make it harder to ascribe a value to because ultimately each novel is nothing but a copy of that code.

It comes back around to how do you assign a value in terms of money to a novel, it’s not just about the time spent writing it. A novel, any novel, is a little pieces of the writers soul laid bare. I say this fully aware of how pretentious it sounds, gleefully aware in fact.

Market economists (a grey inhuman bunch, lack any real soul) would tell you that the market finds its own values, through supply and demand. (see note below). They would advise however that if a new writer wants readers he is best advised to give his work away. Make it free and they may come…. create a free supply and your will attain the peak of the demand curve.

Which is true to an extent, but do people value anything they get for free? Or do they quite naturally assume, ‘If it’s been given away its probably not worth anything’. We are all the children of consumerism after all. Even if you set the minimum price (on amazon for example that £0.99) it may drag in a couple more readers but still it suffers from the ‘if it’s cheap it must be worthless’ factor. Other readers have go so used to getting free books on the internet they genuinely don’t understand why they would have to pay for something. I’ve had people cursing at me on facebook for saying no when they ask for a free copy. The world is ever a strange place, and some people will always expect something for nothing, or next to nothing, and then if they get it they don’t value it for the same reason.

Often if someone gets a book for peanuts, or for free, read the first chapter or even just the first couple of pages and they aren’t hooked immediately they will give up and read something else. Which is fair enough in a way, but shouldn’t be in another. If they have paid a reasonable sum they are more likely to stick with it for a while, and far more likely therefore to get hooked. there is also the small matter of the value of the craft. I care nothing about money made from book sales. It’s not how I make my living, it doesn’t pay the bills because that is what the day job is for, but I do care about people valuing my work and the feeling of value I ascribe to it myself. My novels finding readers is far more important to me, but some basic value has to be attached, and while book sales are unlikely to ever pay me a living wage, or the cost in hours spent, that value still matters.

Artists throughout history have seldom ever been paid for the true value for the work they produce. A fact made even more true in an age and a culture that glorify’s the average, pays footballers millions, yet wants movies and books for free. But putting all that to one side, whats a fair price for a slither of your soul?

I don’t have an answer, I didn’t have an answer when I wrote the original version of this post four years ago, and I don’t now.  But what I do know is this, if we do not value our own work, who will…

Note, I did a degree in politics philosophy and economics. What I have learned is this. Economics is politics with the humanity removed, people are figures on a spreadsheet, their hopes and dreams an irrelevant factor. They never consider if they should do something, only the effect it will have on the little green bits of paper they obsess about if they do. this is why few socialists are economists.