What the scariest monster you have ever seen or read about in horror fiction.
Werewolves? Vampires? Zombies? Old tentacle face himself Cuthulu? Pennywise from IT? Pinhead? Maybe old school Frankensteins corpse gave life… It doesn’t matter because all those answers are inevitably wrong. Something Stephen King, Clive Barker and Lovecraft all knew as they put pen to paper, the thing dear old Mary Shelly knew all too well as she hung around with the king of opium fiends back in the day, the real monsters, the ones that keep you awake all night, are all too human.
Vampires and wolfmen kill for food; it’s just there nature.  Zombies have your brains on the menu because its what they do, all they do. As for old tentacle face, well the desires and reasons for an old god to eat the minds of men are beyond our understanding by their very nature. But the reasons for Baron Frankies dabbling with cadavers and lightening are all too human. Read anything by Stephen King, and it is the humans that do the scaring. Pennywise is a chilling invention of King’s mind, but the truly terrifying character in IT is  Beverley Marsh’s abusive, controlling husband.  In hell raiser its Uncle Frank and Julia, not Pinhead, who are the real evil characters. Monsters can thrill us, but it takes humans to scare us witless and make us keep the light on at night. The more real, the more grounded in reality, the worse they seem.
Humans with all their ‘isums’, all their hang ups and distorted moralities. Thier willingness to do evil things not because they have to but because they want to, for love, or jealousy, through rage and fear, anger and hate. All those things we know we harbour within our own hearts, or in the hearts of the stranger in the street, the friend in our home. We can understand them, we know them, on occasion we all feel them. That is what horror is about, looking in the mirror and seeing the monsters looking back at us, wearing our own face.
Vampire, ho hum, give me a wooden stake and some holy water.
The guy who will sell you out for a bag of dope, a roll of tenners or just for kicks, now that’s scares you.
Which brings me, via this whining road through horror and the human condition, to  #Yourenext a short story by R, L, Weeks 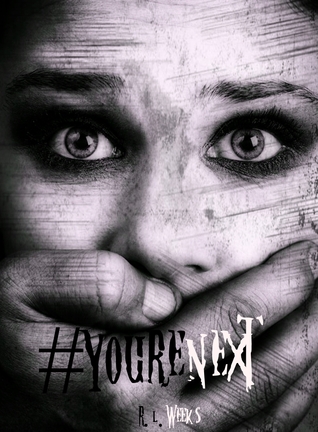 #Yourenext is written by an authoress who understands that humanity makes the best monsters, the same as King, Barker, Lovecraft and Shelly. It’s a tale told of the modern world, indeed about that most modern and defining aspect of the modern world the internet. If anything defines and reveals the depravities that the humanity around us is capable of, its all those little ones and zeros bouncing around the WiFi. Spend ten minutes reading the bottom half of the internet, you know the comments, and you discover the very worst of people lurking there waiting to be spiteful, nasty and judgemental. Now imagine for a moment that all those nasty little words people so easily type were taken a stage further. That out there in the Twitterverse a killer lurks, and then #Titterkiller #Yourenext gets tweeted with your name, and by the time you read it, its already too late …
Its a simple idea, told with terrifying insight, of the world of #twitterkiller, a world so very like our own, inhabited by people so very like us, like our friends , our neighbours, the strangers on the street. So very like it because it is our world, with just one small insignificant step to the right.
It’s a powerful story made all the more powerful for the telling, grounded in a simple idea and the knowledge that if you want real monsters that keep people awake at night it’s their fellow humans that truly fit the bill.
R, L, Weeks writing draws you in, to see the world as it could so easily be, and her real gift is that while you read, it is how the world is. When you finish, you might just want to delete your twitter account and keep the light on for a while …