Year of the Dead

We have lost a lot of loved and respected famous people in the last year. Individuals who’s passing has affected us, brought tears, sadness and that strange form of grief we feel for people who we have never known personally but have been part indivisibly of our lives, Others have died in other years, but in 2016 there have been more than in any year I can remember. So many have passed in fact that it seems an endless list, that this year is out to get us all somehow.

Why we feel grief when those who are the icons of our life pass is no great mystery. I am 46, the icons of my generation, the ones who influence us and were part of our lives when we were children are only a few years older than us, but those years are enough that there passing is not actually unusual. A sad, but true fact, is people start to die of natural causes more often as they get older. Where once an accident or suicide was involved in the passing of such icons of my generation ( Kirk Cobain for example) now it is cancer, heart attacks, and just plain old age, which takes them from us. 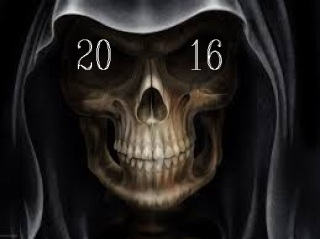 With the internet, that web of wonder that has encircled us all, has come an interconnection with those icons that is all the stronger. A death is not an obituary in the paper, or a two-minute piece at the end of the evening news anymore. That was a segment of our lives which we allow for a little introspective and are prepared for. If you watch the news you are ready for bad news, after all, that’s what the evening news mostly consists of.  In turn, it makes taking the bad news of someone’s passing easier to process. But in the age of the internet it’s more immediate and more all-consuming, catching you on your blind side, unprepared and unready. I did not learn of the sad news of the passing of Carrie Fisher, George Micheal, Liz Smith, Rick Parfitt, (to name the most recent crop) on the evening news, I suspect no one did.

I learn of it on Facebook, That ‘happy’ place we go to in order to see what our friends are up to, look at pictures of cats, and complain about society. And these days it seems the place we express our collective grief at the passing of an icon.

Learning of the death of a loved icon on social media is intimidate and all consuming. We grieve as a collective, share that grief and in doing so we feel it all the more. Yet perhaps it also helps us come to terms with these sudden absences from our lives. Those of my generation, those forty/fifty somethings that grew up with television and the birth of the internet feel it all the more because it speaks to us of our own mortality. If our icons can die, so many of them and so often it seems, then so can we, they are not that much older than us after all.

My parents probably remember where they were when they heard Elvis had died, I can not remember where I was when Bowie died, only that the internet told me he had passed, and a wall of grief washed over it, as it had done only a few days before when Lemmy was taken from us to thrash metal heaven. Where we were when we learned of their passing does not matter. We heard it on the internet and grieved with the world. Perhaps fittingly for the icons which formed our world.

2017 does not promise to get any easier, I have no doubt that at some point in early January some other icon of my life and the Internets collective gestalt will pass. And I will hear about it on the internet, at my most unprepared. As a generation, we have reached an age where our heroes die. Carrie Fisher just the latest in the death list of 2016. That it seems to have been such a bad year for the demise of icons is just a sign of our times. That we do not become jaded and prosaic about the passing of our heroes, is a sign of our humanity, that at least gives me hope in a year so devoid of it in any other way.