H. P. Lovecraft was born, raised and spending the majority of his life in Providence, Rhode Island. It is perhaps therefore not a great surprise that the mysteries of the sea features so often in his fiction. Even now, a hundred years after Dagon was written, it remains a bizarre fact that humanity knows more about the universe beyond the thin shield of our atmosphere than we do about the depths of our own oceans. Back in 1917 when this tale was penned this was even more of a truism than it is today. What may lie in the ink black abyss beyond our shallow shores, caught the imagination of both the writer and his readers alike. It is, after all, the last great unknown on our own planet and stories of sea monsters have abounded since man first sailed upon the oceans.
‘Dagon‘ was one of the first stories Lovecraft wrote as an adult and was published only a couple of years later. (1919 in The Vagrant) It remains one of his best-known, and perhaps, still one of his most disturbing tales. 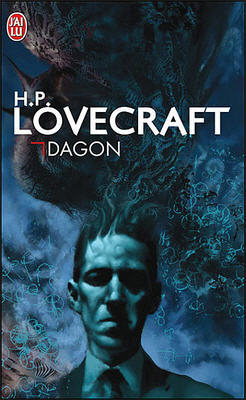 I myself live close to the sea, My local beach, a short twenty-minute walk from the house, is a deserted stretch of sand, boarded by dunes and the eerie lights of the power station down the coast. The bay holds the remains of a primeval petrified forest that washes up like black ash on the sand. Walk along a deserted beach at midnight, as I have on occasion, the sound of the waves crashing against the shoreline. Alone in the still oppressive summer heat, The cold of the water at your feet, a still dead night air, strange noises you can’t account for, bearly audible above the sound of the surf and the sinister nature of the sea is not far from your consciousness. That then the ocean inspired Lovecraft to some of his darkest, and best love fiction is of only little surprise to me. It is, after all, a powerful question. If the shore is the medium between one world and another, the known world and the unknown abyss, then what may lay beyond, in the inky darkness no sun ever shines upon?

‘Dagon‘ is told to us by a former sailor. A man who is now addicted to opiates, in a vain attempt escape the horror he has experienced and the terror gnawing at his mind. Penniless, and soon to be drugless he has decided to end his torment permanently by taking his own life. First, however, he decides to write his story down. His last testament of the events that drove him towards oblivion.
His tale is one of a marina cast adrift in a lifeboat after the ship he worked on was taken by the german navy. He escaped alone in his small craft, somewhere in the mid-pacific. Spending his days ecking out his limited supplies and fighting off the effects of sunstroke. Until one day he awakens to find he is no longer adrift in the ocean but in the middle of a black slimy plain, a few hundred yards from his upturned boat, the stink of rotten fish in the air. So putrid that even gulls would not dine upon them.

Eventually, he starts to survey this strange land, coming to the conclusion it was until recently the ocean floor. A vast segment of it, which has been cast up by volcanic activity or some other unknown cause. Short of options he sets out to find out more, Faced, as he is, with the likelihood that his supplies will run out and he would join the rotting fish in a short time if he does not set out walking.

Eventually, he comes across a hillock in the flat plain, and heads towards it, beyond which he finds the land falls into a canyon, so vast and deep he can not see beyond the shadows of its walls. Yet what disturbs him most is a monolith, one carved by hands, which may or may not have been human, upon which are carvings of things that most certainly were not. A strange cyclopean relic of some long lost civilisation, or more disturbingly, one still in existence hidden from the eyes of men within the ocean depths. 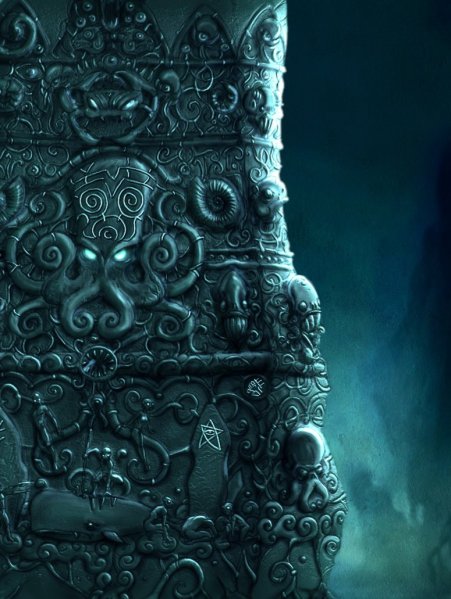 Then out of the inky, darkness of the canyon, a hand appears, gigantic, webbed and inhuman. What follows that hand, haunts the marina’s nightmare ever after, driving him to the dulling effects of opiates.

Sometime after the man is found, adrift once more in an open boat, by a passing merchantman. Delirious from heat stroke, he is raving of things that could not be, and only finally comes to his sense weeks later in a hospital bed.

Is the land from the sea bottom some fever-induced delusion or did events happen as he describes? Does it matter either way? To the mariner, the truth is possibly somewhere in between, and as so often Lovecraft’s narrative invites us to draw our own conclusions.

Perhaps because I live by the shore, and the darkness below the waves has a strong resonance to me. Or perhaps simply because of all the tales, I have covered so far this inspires the most guttural reaction. But I adore, as do many others, this particular story. As such it would be wrong of me to offer it less than a full six tentacles out of six.
It is with this tale that for me Lovecraft comes of age in his writing, as it is perhaps the first truly Lovecraftian tale, and certainly the first in which he begins to explore his mythos.

3 Responses to Dagon : The Complete Lovecraft #4