The Doom That Came To Sarnath: the complete Lovecraft#13

Thirteen is an ominous number on occasion. This being the thirteenth post, it is perhaps appropriate that it is ‘The Doom That Came To Sarnath’. For more reasons than one. As the subject is an impending doom befalling a city, the number seems appropriate. But more than this ‘The Doom That Came To Sarnath’ is a tale of omens. It is also the beginning of Lovecraft’s Mythos, in a way none of the previous stories were. A varied bunch they may have been so far, but from here on in things get stranger. To have a Mythos, you need a Mythology to build it on. And mythologies require myths, Sarnath is Lovecraft’s first great myth… 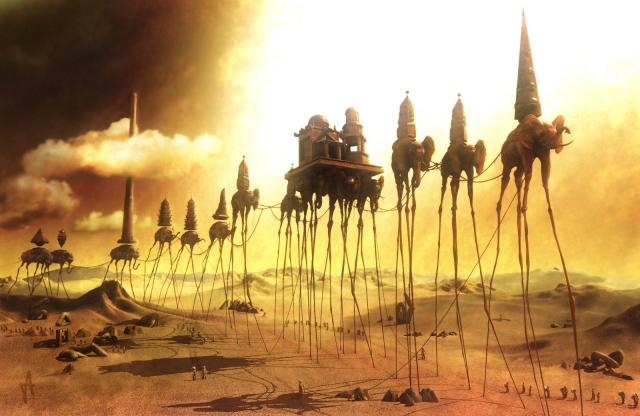 Mythologies always have a few things in common, other that is, than the urban kind. They happened a long time ago before the histories were written or kept, they happened in some other place, and they happened in the memories of cultures only half remembered. ‘The Doom That Came To Sarnath‘ ticks all those boxes. It is also a myth told as myths are told, in hints and partly remembered truths.

There is another thing that myths have in common, in that they are referenced in passing throughout our culture. Just as a writer may make mention of Icarus to illustrate a character pushing beyond the bounds of the expedient, or ‘a face that launched a thousand tweets…’ is someone was trying to be witty on social media. Lovecraft was clearly aware of this in 1920 when he wrote ‘The Doom That Came To Sarnath’, it is a clear attempt to create a mythology of his own with which to frame his stories. Unlike the earlier fictions I have covered in this blog, this is a tale that his other stories reference. Mentions of Sarnath and of Id crop up in ‘At The Mountains of Madness’, ‘The Nameless City’, and ‘The Quest of Iranon‘. It is the first story to actually make mention of the ‘Old Ones’, and ‘Old Gods’, beyond just a bit of colourful cyclopean architecture in ‘Dagon‘. In short, it is the first tale that starts to tie in others to create a greater whole. Lovecraft, from here on in has gone beyond telling stories and started world building, or perhaps cosmos-building to be more exact. Pre-1920 his stories from only a loose collection of mostly unrelated creepy tales in comparison, while plenty Post-‘The Doom That Came To Sarnath’ fit that description too, you can start to feel that behind it all Lovecraft has a bigger story to tell, a greater ‘truth’ for want of a better world. Mankind is not adrift in the uncaring cosmos, there are other things out there, and some of them are hungry….

The story sets the myth sometime in prehistory, probably even before the rise of Egypt in its most ancient form, near the dawn of man, and civilisation. A time when he still shared the world with the last vestiges of older races. Like all good myth, it makes no attempt to set itself in time beyond a vague ‘more than 10000 years ago…‘

A race of men who will become the Mnar, but are little more than wandering tribe’s, is starting to found cities among the fertile river Ai, but some travel further craving fresh land and founds a city on the shores of an isolated lake. So isolated that further around its shores lays a city of strange folk, folk that are not human in any way we would recognise. The men of Mnar do not take kindly to these others. They find their aspect unpleasing, which is a wonderful euphemism for fish faced, proto-deep ones, left behind by mankind’s ascent to dominance. The city is Id, its populous strange mist dwelling humanoids, who worship a giant lizard god called Bokrug, who’s idol sits in the centre of their greatest temple. The men of Mnar unite in a common cause, killing every one of the denizens of Id. Then they make a point of celebrating it every year afterwards with a huge festival. Because when you have committed a genocide, it’s just what you do. At the first of these festivals, however, the high priest dies and writes the words ‘DOOM’ on the pedestal where sites the stolen idol of Bokrug, which in turn disappears.

As this is a myth, we are then treated to a thousand years of the accent of Sarnath to become the greatest of cities. Rich with description and mythic foreboding. You can feel the rise to power, and the slow descent into decadence that follows close behind. As time passes only the priests remember that forewarning of ‘DOOM’. More time passes and the many cities of the Mnar all pay homage to the greatest of cities. Men from all over the world come for the festival of the raising of Id on the thousand anniversary of the genocide. But on the night when the festivities reach their height, a great mist comes down upon the lake and the city of Sarnath. The ‘DOOM’ has arrived…

This is good myth, what is more important is, it’s good Lovecraft Myth. It sets up so many other tales and so many concepts, ones Lovecraft refers back to time and again. It is also myth that is used in roleplaying games and board games like ‘Call of Cthulu’ which are many people’s first introduction to Lovecraft. Idea’s found first in this story crop up everywhere. Without ‘The Doom that Came to Sarnath‘ it is hard to imagine where the wider mythos would have come from. It is a rock on which the foundations of Lovecraft’s wider universe are based. So it is difficult to stress how important this story is to the mythos. They may have existed without it, but it is the first of the rock on which Lovecraft wrote which led to such tales as ‘At The Mountains of Madness’, ‘Call of Cthulu’ and all the rest.

In it he established the ‘Old Ones’, the idea of none human civilisation that pre-date humanity. The ‘Old Gods’ and the idea that they are still a force in the darkness waiting to return. Then right at the end, he puts in modern man, examining the ruins of the past, and the thought that there are some things best left undisturbed… Which are exactly the things that an inquisitive man will awaken..

If there is a story that signifies all that is to come, that ‘the stars will be right’ some day, this is the one. So no surprise then that it gets a full six tentacles of impending doom….

4 Responses to The Doom That Came To Sarnath: the complete Lovecraft#13