I don’t do poetry…

In a rush on the way out to the day job, I grabbed a random notebook form my pile of half-used notebooks, knowing I needed one for work. It wasn’t until I was sat at my desk, on a conference call and needed to take a few quick notes I realised the notebook in question was about 7 years old and had notes in it form back when I was originally plotting and planning Passing Place. It was a little treasure trove of oddity in fact and a glimpse back in time to what was passing through my mind at the time.

Among other things, it had the original chapter plan, with some of the original chapter titles, not many of which made the final cut, and almost none of them in the same order as they appear in that list. A few characters sketches of characters that don’t exist in the final novel. Little outlines of short stories that make up barroom tales in the novel, most of which changed, were cut or became something else entirely. A couple of quotes I wrote down, all of which come from Rumblefish an old Mickey Roake movie form the mid 80’s, back when he seemed like he would be the next James Dean and made movies that had real substance to them:

‘If your going to lead people, you need somewhere to lead them to’

‘If the fish were in the river they would not fight’

No, I don’t know why I wrote those particular quotes down either…

There are notes for a story called ‘Bull Dancer’ of which beyond these scattered notes I have no recollection of what I intended to write. There is an original outline for what became the Inuit saga I wrote in the middle of Passing Place because every good novel needs an Inuit saga in it… There is a brief bit of dialogue between the Piano player and the cat that I scratched down, which is in the novel but not entirely intact, the original scrawling reads:

Girl crying in the corridor at night

“I suppose I better wake up then”

“I never said it was your dream.”

There are strange things as well, things that make no sense, which I have no point of reference for and not the slightest clue what they mean…

does not stomp the woman with green eyes, stomps himself instead…

Really not a clue what was going on there, who the woman with the green eyes might be and how anyone can stomp themselves?

The point is, notebooks are a great resource for a writer, even when we don’t always remember why we wrote what we wrote, or what the hell we wrote it for in the first place. Even when we wonder just how drunk we when we wrote about a woman with green eyes… And occasionally delving into old notebooks is a strangely wonderful thing to be doing. I would advise anyone who wants to be a writer to keep all their old notebooks, you can find the stranges of thing in them, and occasionally the gem you forgot about, like ‘The Bull Dancer’ which if I go through the notes again may actually appear in ‘Something Red’ as I suspect I have a couple of pages on a hard drive somewhere that I started.

So keep your notebooks, and read them on occasion, you never know what you will find. As I said in the beginning, I don’t do poetry, yets I found some poetry I wrote down years ago… In this case, a poem that first created one of Passing Places most well-loved characters the Greyman who mops the floors and tells his own strange tale about where he came from. 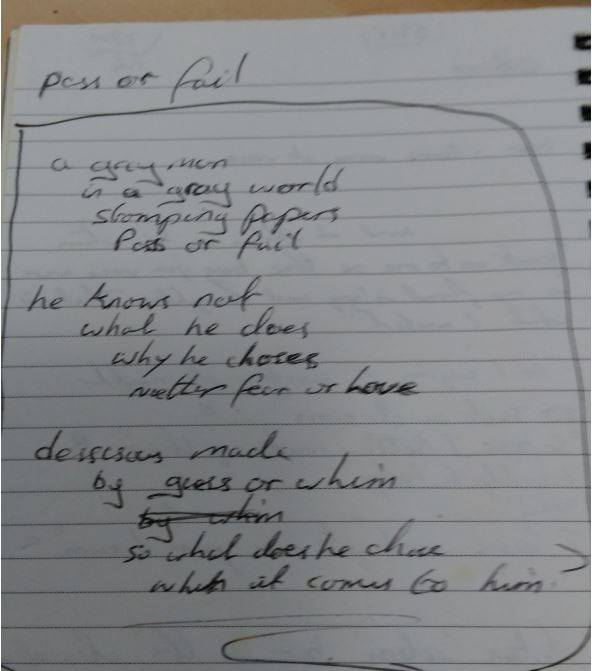 As I said, I don’t do poetry, and I promise I’ll probably never do any again. But readers of Passing Place will recognise Greyman’s tale from this piece, and I like this one little poem I wrote in a moment of weakness and delving through old notebooks…

1 Response to Delving through notebooks…