All About Hemlock Soames in Six Questions

Thank you to our host, Mark Hayes, for the opportunity to introduce to you my friend, Hermia Barrington, also known as Hemlock Soames, in her first adventure into the wilds of Scotland (and Victorian society): Hemlock Soames and The Waterhorse.

Q1: Tell me about your book:

The Waterhorse is set in an alternative Victorian Britain, mostly London and Scotland. Some history has been altered to fit my steampunk world, and some plausible liberties were taken with some of the geography. 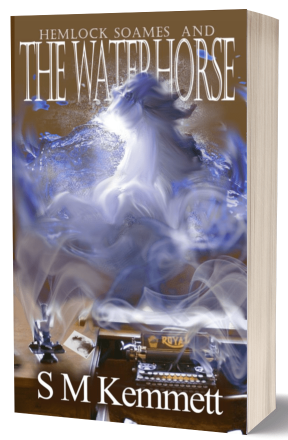 It’s 1894 – the height of industrialism, an era of unprecedented scientific discovery. Hemmy is determined to join her husband’s expedition in search of the legendary creature, the Waterhorse. Nothing will stop her; not a secret society bent on stealing the Waterhorse for profit. Not even her own beloved husband.

But is Society ready for Hemlock Soames?

Q2: How did you come up with the idea for a Cryptoid-chasing heroine?

The idea for Hemlock Soames and The Waterhorse began with the Hemlock Soames character, herself. Hemlock was originally a minor character in a TV script on which I was working with some fellow volunteers at local Adelaide TV Channel 44. As the story grew, so did the character. When the project ended, I kept my two (copyrighted) characters and transported them back in time 150 years – and steampunk’d them.

The kelpie was inspired by a sculptured prop I made for the same series. Having studied Archaeology and Traditional Literature, I also had more than a passing interest in Mythology. Fortunately, Cryptoids are popular in the steampunk genre.

The name of the main character, Hemlock Soames (known as Hemmy to her close friends) was really just a place keeper for the TV script. I scribbled it in so I could write the story down before it evaporated.

Originally, Hemmy was meant to be just a voice on the telephone, a Miss Marple type. The director saw the name, liked it, and suggested we keep it for the show. I complied. When the part was cast, the actress was much younger than I’d expected, so my book character is young, too.

In The Waterhorse, we discover the origin of her Hemlock Soames nickname: As a child, Hemmy’s big brother, James, was teasing her about her fascination for Sherlock Holmes. He got the names muddled, and Hemlock Soames was born. (I consider she is named after the American Hemlock tree not the smaller, poisonous plant.)

Hemlock Soames and the Waterhorse was not the first book I wrote, only the first to be finished to an acceptable standard. I thought it was a short story, at first. But the characters had other ideas.

The Steampunk ambience was a surprise.  I always thought I would write fantasy.  My early reading years centred on Fantasy, including Tolkien. When I got older, I re-read Lewis’s Narnia Chronicles.

Or I thought perhaps I’d write historical YA, like Rosemary Sutcliff. My short story ‘Dragonheart’, published in Specul8 Publishing’s Hoards of the Great Fire Wyrms is part historical, part fantasy. I also wrote short Science Fiction as a teen.

I’d never heard of the steampunk genre until shortly before I joined my first writing group – a speculative fiction writing group – and Karen J Carlisle invited me to join. Best creative thing I ever did! So, I re-purposed Hemmy. (Re-purposing is also very Steampunk.)

The more I researched the Victorian world, the more it resonated with me, and the more parallels I found between Hermia’s generation and our own times. Rapidly changing technology, the ingrained idea that God and science are incompatible, questions of the place of women in society. And change. Rapid, confusing change.

Q4: Tell me more about Hemlock Soames and the Waterhorse characters.

Hermia and Elias Barrington are a well-to-do, recently married young couple, with well-connected friends. They’re unconventional, and thought of by some of their peers as a bit odd.

Hemmy is not your typical Victorian Lady. She’s educated in Science, like both her parents. She’s curious, investigative, and definitely too independent. As a woman, Hemmy isn’t afforded leniency for her eccentricities (as her husband is), and is encouraged to hide her true nature from Society.

Why did I Hemmy a married woman? Well, why not?

I was told once: The Steampunk heroine usually ends up marrying her love interest at the end of the book. But why does the story have to centre around her finding a man? While her marriage provides a foil to explore society’s opposing gender expectations, the story was about Hemmy’s adventure, not whether she would get married. (And nobody told me I couldn’t.)

Her husband, Elias, is a secondary character. He’s an inventor, explorer and Cryptozoologist. He travels the world, hunting for mythological creatures, much to Hemmy’s dismay. Someone has to make sure he stays out of trouble, and Hemmy has volunteered.

Q6: How do you create your stories, and will there be more books?

I’m a ‘by the seat of my Pants-er’ by instinct. Then I plot, once I’ve got more of the story down. Then I notice if there are themes. Then I do lots of re-writing and editing.

Hemlock Soames’, recurring themes of disguises, facades, appearances, expectations and gender roles (The Angel in the House, The Empire Builders), as well as science vs religion and technology vs nature all resonated with issues that still face today’s world.

What’s next? I’m working on the dozen fantasy novels under my bed. The next one will be a fantasy, then I plan to work on sequels for Hemmy. And probably interrupt myself with short stories now and then. 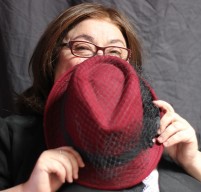 SM Kemmett scribbled her first story at age seven. She flirted with various careers, but her true passion is wordsmithing. Sharon graduated from Flinders University with a BA in English and Archaeology. She writes speculative fiction, preferring science fiction, fantasy and steampunk, and dabbles in historical fiction. She previously volunteered as a tour-guide at the South Australian museum. She’s currently volunteering at her neighbourhood library as Local History research editor.

Sharon lives in sunny Adelaide with her ‘feline domestic symbiont’. Both are in voluntary isolation until the resolution of these current difficulties.

Where to find Sharon:

Where to buy Hemlock Soames and The Waterhorse (paperback):

Or you can buy the paperback direct from the author (if for postage within Australia) – https://smkemmettwordtailor.wordpress.com/buy-books/

Hemlock Soames and The Waterhorse will be available as an eBook via Smashwords and Amazon soon.

3 Responses to All About Hemlock Soames in Six Questions