Indie April gust post By Nils Nisse Visser, and with a little help from his friends

Not long ago I had a rather wordy guest blog on The Passing Place called ‘Creative Osmosis’. I listed a number of inspirations and wild plans to make work of this. We’re half a year on and some writing has been done but other things have been achieved as well.

One of the potential settings described in that guest blog concerned the small town of Rye at the eastern tip of Sussex, on the edge of the infamous smuggler’s country of Romney Marsh.

Rye has been explored at length over the last six months, first in writing, with the town as setting for both the short story ‘Wages of Sin –A Tale of the Dark Design’ and the novel-in-progress Fair Night for Foul Folk.

Moreover, a friend convinced me to contact some crucial locations in Rye, the Ypres Tower managed by Rye Museum and The Mermaid Inn. I attempted to explain what Smugglepunk was and hesitantly asked—

—the answer from all was a hearty ‘yarr, let’s do this’. Which is how it came to be that mid-March, a week before Lockdown, I descended on Rye in the company of a dozen steampunks and pirates, as well as two photographers. Our aim was twofold. The first was to recreate the flavour of the Hawkhurst Gang, who used the Mermaid Inn as their local headquarters in the 18th century, carousing in the taproom with their weapons openly on the table according to temporary accounts. The seconds to recreate aspects of my fictional ‘Sinneport’.

It was truly surreal to be partake in the photo-shoot, participating in some of my own scenes. Surreal and humbling. I’m very grateful to Rye Museum, the Mermaid Inn, the participants and the two photographers Corin Spinks and Craig Neesom.

They’ve all made it possible for me to offer you a visual tour of Sinneport and let the pictures do most of the talking.

So, welcome to Sinneport. 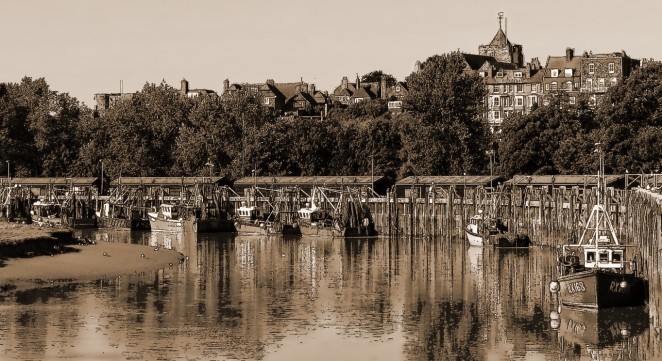 Sinneport is perched on an outcrop of higher ground at the confluence of three rivers at the edge of Romney Marsh.

On 31 October 1871, Alice Kittyhawk entered Sinneport through the Land Gate, uncertain as to whether she was a captive or a guest…

…and uncertain about whom she might meet in this hive of villainy.

On her way to the Mairemaid Inn, Alice passed Wipers Tower, the medieval castle that was now the town jail.

A prison brimming with vile scum – or pure innocents, depending on whom you ask. 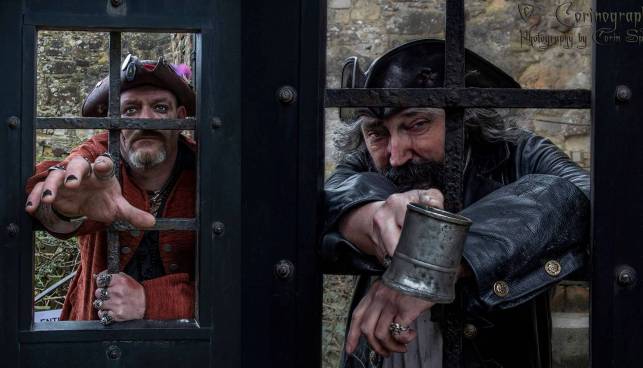 Plenty of innocent smugglers languished unfairly behind bars here, but mayhap it was also the scene of daring prison breaks.

Images by Corin Spinks from the Rye Shoot

Moving along Sinneport’s ancient streets, shadowy movements in twittens (alleyways) a reminder not to go peeking into twittens.

Alice’s destination is the Mairemaid Inn. 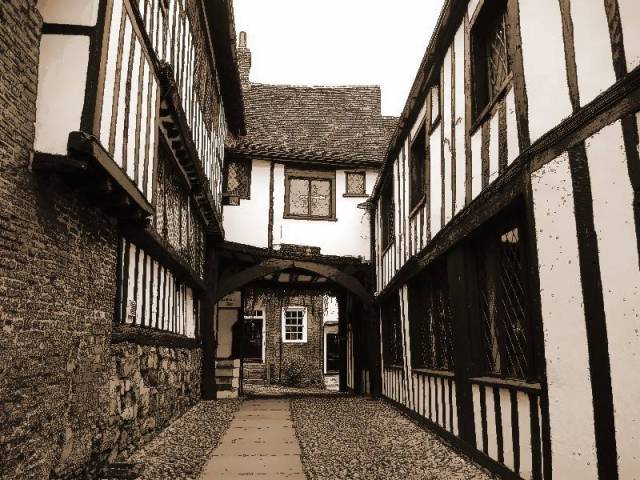 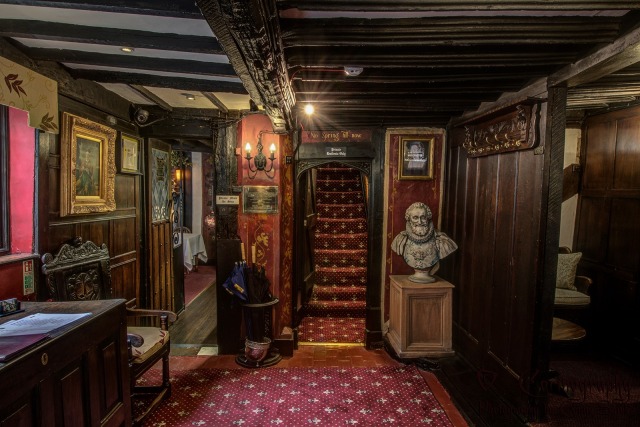 The Mairemaid’s chambers and corridors are laden with echoes of the past. The Inn also has fake wall panels, a secret staircase, secret corridors, and extensive cellars with tunnel entrances. 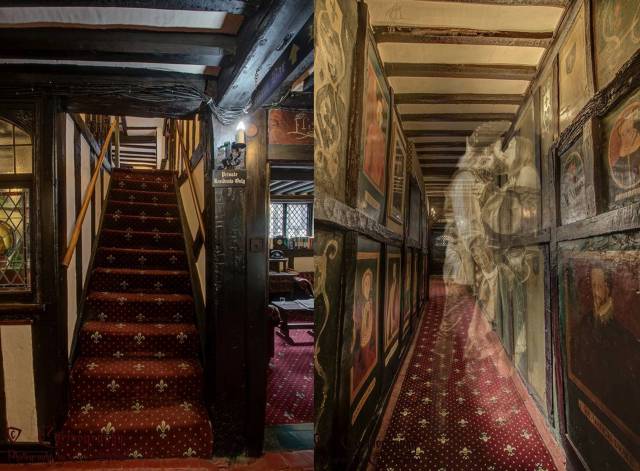 When Alice arrives the Mairemaid is owned and run by Tess and Nellie Hawkhurst, and as of old it’s a centre of Free Trade activities, the headquarters of Scylla the Mairemaid’s Mudlarks Gang. 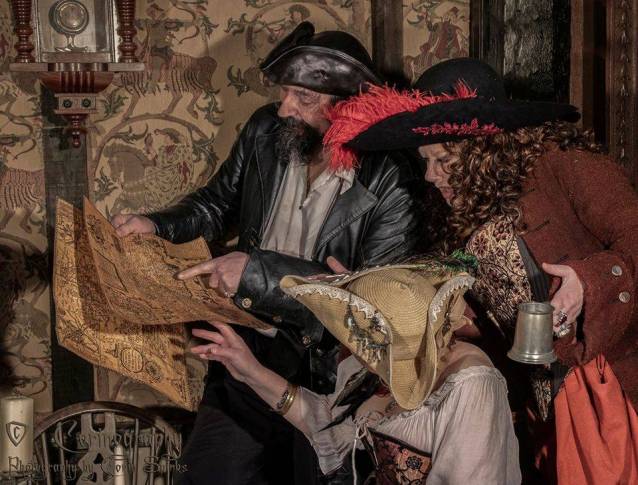 Although Sinneport seems a town lost in time, and in many way is, it’s not entirely devoid of modern influences. 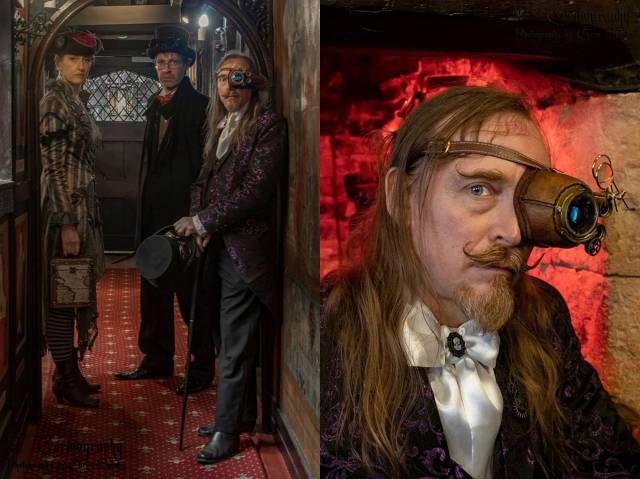 For Free Traders here too have taken to the sky in airships, and modern technology is much in demand.

Theodore Pilkington-Rhubarb is a brave and intrepid reporter from the British Steampunk Broadcasting Co-operation – looking for a good story.

These worlds, casually thrown together, make up the world of Sussex Smugglepunk.

I sincerely hope you’ve enjoyed your tour of Sinneport and also understand why I find these locations so inspiring for my re-invention of Sussex smuggler’s tales.

Now for the stories. ‘Wages of Sin’ has appeared in The Dark Design Anthology The Tale of the Red Queen and Other Stories, and it would be wrong of me not to tell you that Professor Elemental has called this book ‘bloody marvellous’. 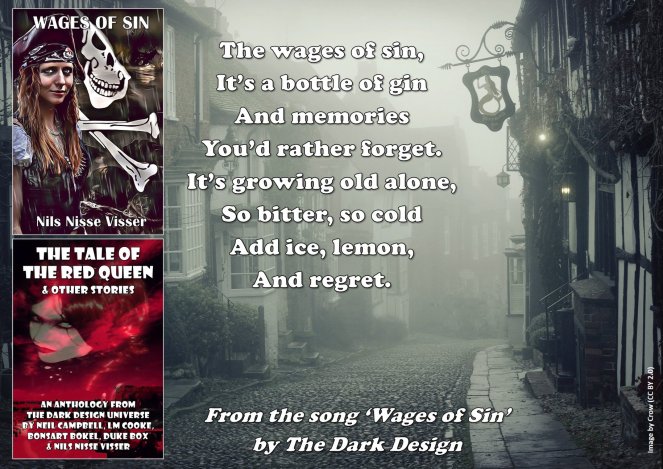 ‘Wages of Sin’ takes place on the night of 31 October 1871, and the story overlaps with that of Alice’s in Fair Night for Foul Folk. Both can be read separately, but readers of both will note the overlap. I’m still writing Fair Night for Foul Folk but as a Lockdown Special I’m publishing it as a serial online, and the first seven chapters or so are up and can be found here: https://www.nilsnissevisser.co.uk/fair-night-for-foul-folk-(seria)

Last-but-not-least, a further story is also available as a Lockdown Special, featuring a slightly younger Alice and suitable for adults and suitable for young readers (although their parents might not wholly approve as it’s filled with stuff kids actually like (breaking the rules, morbid fascinations, speeding on an electrical trike, etc.).

About Nils Nisse Visser (by Mark) 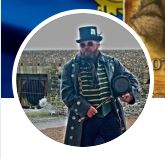 Nils is a free-lance writer, occasional poet, archer, Homelessness activist, who was born in Rotterdam in the Netherlands in 1970 (which was the best year ever to be born *Mark), he grew up in the Netherlands, Thailand, Nepal, Oklahoma, Tanzania, England, Egypt and France. Taught English at various Dutch secondary schools for 18 years, but his firm belief that education is most effective when it is fun raised a few eyebrows. Having been told too often that he lived in his imagination, he took the hint and moved there on a full-time basis. He currently lives in Brighton in the county of Sussex in England.

Rather confusingly he sometimes writes as Nils Visser, Nisse Visser or Nils Nisse Visser. For which he apologies.

1 Response to WELCOME TO SINNEPORT