The Cats of Ulthar: The complete Lovecraft#17

Cats walk between worlds, the real and the mystical, the mortal and the spiritual, the land of the living and the land of the dead… Least ways this is a recurring theme through fiction and the mythologies of the ancient world.  Bast, the Egyptian cat goddess may be the most well-known, but she is far from alone. Humanity has always had an odd cultural relationship with the feline. Unlike their canine equivalents, cats are more house guests than pets. No one ever trained a cat to hunt along side them, or to guard their homes, and the chances of the cat fetching your newspaper is minimal. Lovecraft was a lover of cats, and of all his stories, ‘The Cats of Ulthar’ was among his favourites.

If ‘The Doom that came to Sarnath’ is Lovecraft doing myth, ‘the Cats of Ulthar’ is Lovecraft doing folk-law. Not ‘folk-law’ of the fairy-tale variety, but more of the darker roots that lay behind even the most sanitised modern versions of fairy tales, closer to the original brothers Grimm tales they collected from the backwoods of Germany in the .early 1800’s. The original Grimm tales were bloodier affairs, the ‘happily ever afters‘ we are all so used to did not feature heavily. In Snow White, the queen died by being made to dance in red-hot iron shoes. the original sleeping beauty is repeatably raped by the prince and only awakens not by true love’s kiss but when one of the children she has borne the prince sucks the spinning wheel splinter from her hand. And those are some of the more pleasant examples. Lovecraft, unsurprisingly, take his ques from the original tales rather than the children stories they became.  ‘Ulthar‘ is a dark piece of folklore, yet a charm to it all the same.

Lovecraft tale may well have been inspired by folklore, but it was also doubtlessly inspired by Irish writer Lord Dunsany. Lovecraft was a Dunsany fanboy, and ‘The Cats of Ulthar’ among other things, is an imitation of the Irish writer’s style. Of all Lovecraft’s tales it is for me the most Dunsian, but it is far from the only one inspired by Edward Plunkett writings, in particular, his dreamers tales, The White Ship, The Street and The Doom That Came to Snarth, which were all written earlier in his career were likewise Dunsany inspired. As were other tales to come.

The village of Ulthar is a place where no one harms a cat, certainly no one would every be so foolish as to kill one. As such it is something of a haven for felines, or to put it another way, a little over run with the furballs. This amiability towards felines is not from a communal love of cats however, but stems from bloody events in the village’s past. Just like all good folklore, it all comes back to blood at some point.

The villains of the piece are an old couple with evil habits, who take a certain glee in the torment and killing of their neighbors pets. The villages know of the old couples vile deems but fear them too much to take action against them. They do however, learn to take care to keep there animals away form the old couples cottage. Time, as it is known to do, passes. Until one day a group of travelers pass through the village. Among them a young boy who speaks little but loves his small white kitten. When events take a predictable turn, and the kitten is found dead, the travellers, Romany gypsy’s by their description, lay a curse of sorts upon the old couple, and blood leads to blood in a grisly and feline fashion.

Lovecraft understood folklore, in much the way he understood myth. It needs a darkness to it, a layer of shadow, of suggestion and possibility. ‘The Cats of Ulthar’ is a masterclass in the dark fairytale. A touch of morality to it, to give it strength, bad things happen to the bad people. The guilty pay for their actions. While others live with the consequences. So no one harms a cat in Ulthar, because should they ever be tempted to do so, they have only to look towards what remains of the vile old couples cottage on the edge of the village, and what little remains were found within…

This was, we are told, one of Lovecraft’s favourite tales. I must admit to having much fondness for it myself, but then I have a fondness for dark folktales, cats and the odd whisper of blood in the wind. I am hard pressed to give this anything but six creepy tentacles of Lovecraftian goodness, as I find it somewhat flawless… 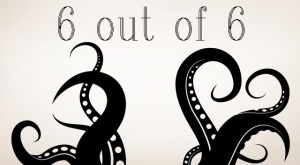 3 Responses to The Cats of Ulthar: The complete Lovecraft#17