It’s Indie April, a celebration of all things Indie, be it novels, movies, music or art. The idea being to encourage interaction between indie creatives, and that most elusive of beasties the wider audience, and it is a time to celebrate all those wonderful indie creatives and their work.  As a writer, my focus (this will come as little surprise) is on bringing indie writers to your attention. So for the rest of the month, I will be periodically featuring some of the best the independent scene has to offer. Some of these will be names familiar to those who have read my blog before, some will be new, but all of them are undoubtedly wonderful and deserving of a wider audience. So take the plunge and invest in some indie goodness, give an indie writer a try, I guarantee you’ll not regret it.

Craig Hallam is an author whose works span all corners of Fantasy, Sci-fi and Horror.

Since his debut in the British Fantasy Society journal in 2008, his tales have nestled twixt the pages of magazines and anthologies the world over. His Gothic Fantasy novel, Greaveburn, Steampunk trilogy, The Adventures of Alan Shaw, and the dark short stories of Not Before Bed have filled the imaginations of geeks, niche and alternative readers with their character-driven style and unusual plots

Like the Thieves guilds novels previously I have reviewed a couple of Craig’s novels on this blog previously, and again it’s safe to say I’m a fan. His favoured Tag line of ‘Embrace the wierd’ sums up his wild and wonderful imagination. His Alan Shaw novels chronicle the journey from an adolescence on the streets of London in a world just starting to see the delights of a Steampunk universe come into being to the life and times of an adventurer making his living while walking the line between black and white moralities, with the occasional slip into the grey. Written in the tradition of tales that featured in the likes of The Strand Magazine, each episode takes Alan further into the grey area’s as he faces mechanical squid submarines, daring robbers on bat wings, the occasional arch daemon, and all the weird and wonderful dangers of a past that never was.

You can find out more at https://craighallam.wordpress.com/ and find his books on Amazon and just about everywhere else. Not to mention at any steampunk convention within a hundred miles of Doncaster where Craig happily gives talks and meets his ever-growing army of fans

You can also support the excellent Mr Hallam on Patron by following this link, in that grand tradition of artist patronage that seems so right for a gentleman who engages in Steampunkery. There you will find all kinds of interesting stuff, so take a look see.

Aside from his own novels, Craig also has an Alan Shaw story in the Harvey Duckman Presents Anthologies. Which by sheer coincidence (as I may have mentioned) was released last weekend…  Just waiting for you to read, so if you fancy a taster of both Craig’s work and 13 other Indie writers of SciFi, Fantasy, Steampunk and Horror, you could do worse than get yourself a copy, so click on the lovely picture below 🙂  More indie later in the week with Kate Baucherel the writer of the fabulous SimCaviler novels among other things… 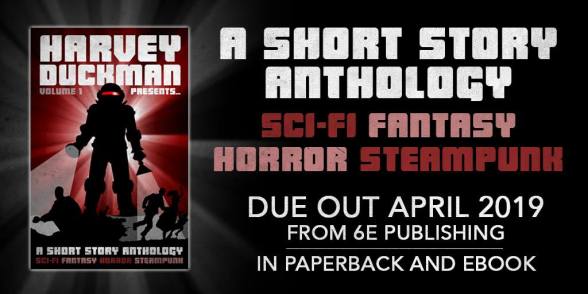 2 Responses to Indie April #2: The Adventures of Alan Shaw