It’s Indie April, a celebration of all things Indie, be it novels, movies, music or art. The idea being to encourage interaction between indie creatives, and that most elusive of beasties the wider audience, and it is a time to celebrate all those wonderful indie creatives and their work.  As a writer, my focus (this will come as little surprise) is on bringing indie writers to your attention. So for the rest of the month, I will be periodically featuring some of the best the independent scene has to offer. Some of these will be names familiar to those who have read my blog before, some will be new, but all of them are undoubtedly wonderful and deserving of a wider audience. So take the plunge and invest in some indie goodness, give an indie writer a try, I guarantee you’ll not regret it.

Riftmaker and other novels by Pheobe Darqueling

Pheobe Darqueling became interested in Steampunk back in 2009, which rekindled her long-dormant love of writing fiction. She started her first blog on Steampunk in 2012, but in 2017, she left it to become the second editor for SteampunkJournal.org, the world’s most popular Steampunk news site. Aside from writing novels, and editing anthologies, she is busy becoming the Queen of all things Steampunkery across the internet.

When I read her first Novel, Riftmaker, I was both surprised and delighted by the width and scale of her ambition. A strange world linked somehow to ours by rifts, yet when humans pass through they take on the forms of animals. While animals take on the forms of humans. In the hands of a less talented writer, this could have been a recipe for confusion, but Pheobe has the craft and style to match such ambition. A plethora of characters and complexity of sub-plots interweave like many strands of a web to create a novel rich in depth and broad in scope. A novel full of wild idea’s, strange sights and odd characters all with their own hope and dreams. Yet Pheobe never gets you lost, even at the heart of her miraculous clockwork city… Her next novel, No Rest for the Wicked is out now too.

You can find out more about the what lies at the court of the Queen of all things Steampunkery at her blog https://phoebedarqueling.com/home/ and you can, of course, find her books on Amazon and elsewhere, and at steampunk gatherings from the USA to Germany…

Aside from her own novels, Pheobe also…  Actually, I jest… Unlike the first three Indie Authors I have featured this week she doesn’t have a short story in the Harvey Duckman Presents Anthologies. Which by no coincidence what so ever was released last weekend…  Just waiting for you to read… Pheobe may not have a story in there but a couple of writers of Steampunkery and 12 other Indie writers of SciFi, Fantasy, and Horror do, so you could do worse than get yourself a copy, so click on the lovely picture below 🙂  More indie later in the week Peter James Martin the creator of the Brennan and Rix tales, of a man and his talking rat (who may be in Harvey D, but that would be telling …) 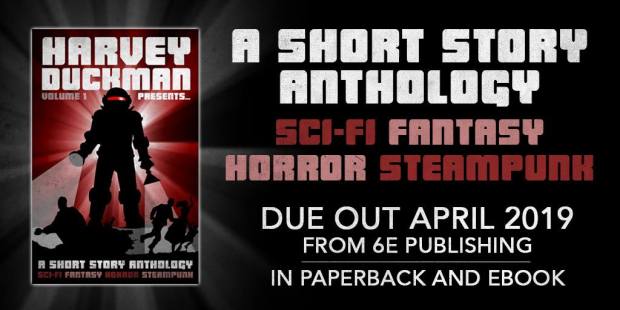