No one likes to receive a bad review, be it as a writer, as a seller on eBay, or for that matter for your pecan pie from a dinner guest… 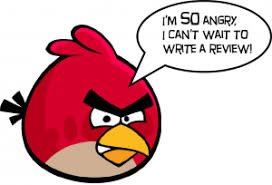 In the case of the pie, well if your guest doesn’t like it they don’t have to eat it, and what the hell, more pie for those who do.

As far as eBay is concerned a bad review as a seller can be a kick where it hurts, it might even freeze your account. (as happened to me once when the buyer of a spare ADSL adapter I sold them for a quid complained about the price, the packaging and the wrong kind of rain ruining their begonias.)

As a writer, it can hurt, because what is reviewed is something you have put your heart and soul into. It’s like beating up on one of your children and may seem like it has been done for no other reason than malice. (much like the eBay review that got me banned as a seller, despite sending them a second ADSL adaptor and really going the extra mile to accommodate a string of increasingly ridiculous requests, bitter, moi? Not at all.)

Only the very vain, or the stupid, would expect to please everyone, or that their work will be universally praised. Getting a bad review is just something that happens. As a writer, you’re supposed to live with it and move on. Perhaps, if the criticisms are valid, intelligent and constructive, you can learn from a bad review. But if you expect everyone to like your novels you need a bit of a reality check. Yet despite this, bad reviews still hurt you personally, unless your skin is thicker than rhino hide. Reviews that seem driven by nothing but malice, however, well that’s something else, and I am not even sure how to respond to them. Which, in case the title was not a clue, is the reason for this particular post…  To be exact, this American review of Cider Lane…

1.0 out of 5 stars Not worth the time
ByAmazon Customer on June 21, 2017
Format: Kindle Edition
I wish I could give this no stars. The book skips back and forth, is very disjointed and frankly did not hold my interest. In the beginning, I liked the character development, but this quickly failed too.

As you can see from the date, I have sat and stewed on this for a while now. If anything this post is about moving on from that and putting it behind me, because it has been sat there irritating me for a while. Not because I feel it is an unfair review, assuming this is genuinely what the nameless reviewer thought then they are entitled to their opinion. Cider Lane has plenty of great reviews, which balances out any damage to my ego, though not the damage to its rating on Amazon.com, as I have fewer reviews on the US Amazon site so this single bad review has an unreasonably adverse effect on the rating. Most of the reviews are on Amazon.co.uk, but I am a British Author, and to the extent that the book is written for an audience it is set in Britain, in British English and is more likely to appeal to British readers, the rating on amazon.co.uk isn’t affected at all by the review above.

The reason it irritates me is what the reviewer says. It’s clear they did not enjoy the book, it’s also clear they either did not enjoy the stylistic and narrative choices I made when I wrote it. That’s fine BTW. I made narrative choices about how I wished to tell my story. I could have told it is a simpler straight through fashion. Start a story at point A, write in a straight unweaving line to point B… But I wanted to write something I found interesting as a writer, a little more challenging as a writer, and in fairness perhaps more challenging of the reader. This would be what the nameless reviewer refers to as ‘skips back and forth’ which I can’t deny, but it does so for good reasons.

Cider Lane is told in the main from the perspectives of its two main characters, Susanna and Colin, in alternate chapters. Once the paths of these two main characters cross their stories intertwine. They are very different characters. Their individual perceptions of events differ. Indeed, it is how each of them perceives different events, how their motivations differ, and how the actions of one are misunderstood by the other that is the core of the story. It is that which made the story an interesting one to tell, and that was the challenge in telling it. The difference between the one holding the blade, and the one the blade is pointed towards, and the interplay between these two narrative viewpoints is at the heart of everything. To complain it ‘skips back and forth‘ is to miss the point entirely.

Yet, even that is fine. I never expected it to be a novel for everyone. I  never expected everyone to ‘get’ it. There are several reasons why I chose to self-publish this novel, rather than pursue a publishing contract, but one of them was simply that I would not expect a publisher to want to publish a first novel that makes off-beat narrative choices from the word go. If for example,  Iain M Banks was not a best-selling author already then I suspect his publishing house would have rejected ‘Use of Weapons‘ because of the narrative choices made in the novel. (The narrative tells the story in a reverse chronology, beginning at the end and moving to the beginning of the story) While Cider Lane is not ‘Use of Weapons’ and the narrative choices are not quite as boldly different, it is still atypical, and off-beat enough that the mainstream would not touch it with an unknown writer. For exactly the same reason, I never expect it to be universally liked, not everyone enjoys something atypical.

What does bug me is this, why would anyone write this review in the first place? There is nothing constructive about it, it is just a demolition for the sake of a demolition. It is not comparable to going out to a restaurant, been insults by the staff, being given cold food, badly cooked and then over charged, such an experience would warrant a bad review. It’s a novel, one the reader clearly did not enjoy, which is fair enough, but to be this scathing, and even to take the time to write a review for a book you have enjoyed so little seem strange to me. When I am not enjoying a book, which happens once in a while, it’s either because it ‘isn’t for me‘ or because I just am not drawn into it. What I do then is put the book down, and read something else. If I read a whole book, it must have had something in there for me. I don’t think I have ever reviewed a book and given it less than three stars, certainly not if I am actually taking the time to write a review, I would have to really really hate a book to give it one star and state I would have preferred to give it none at all. I could understand this (to an extent) if the review had paid $20 for a hardback and then found out they hated it. But in all probability, given when the review was published on Amazon, two weeks after the Kindle giveaway when I made the novel free for a week, the anonymous reviewer paid nothing for my work at all. A free book he or she did not enjoy, yet took the time to write a hatchet job on…

It’s almost a back handed compliment that a review was written at all. I’m not discouraged by it, indeed apart from a blip on my Amazon ratings its just seems to me to be the rantings of a strangely objectionable individual. This little post has let me get it off my chest. Cider Lane has plenty of great reviews, it even won an award once.  Take the review at the bottom of this page, also from Amazon.com,  A review so good I had to pinch myself ( and double check it was Cider lane they were talking about frankly as it sounded like a better novel than my own to me when I first read the review.)

What ever moved ‘ByAmazon Customer on June 21, 2017‘ to write such torrid a review of Cider Lane, in the unlikely event they ever read this, I am sorry you disliked the book so much. But I hope, and indeed pray to the fictional sky god of my choice, that you both, find some joy in your life, and never read one of my books again. Or indeed anyone elses, because I am not sure anyone deserves reviews like this… Writer’s strive to craft something from nothing, sometimes we fail, but no writer ever deserves a review like this. We all get them though, once in a while, we all scream with frustration once in a while. This is me ranting it out of my system, so now that’s done I shall take a breath and get back to writing stories that people, on the whole, seem to enjoy.

And: Just to redress the balance of the universe…

5.0 out of 5 stars An Excellent Existential Read!!
ByA Randallon November 21, 2015
Format: Kindle Edition
“All these anxieties are in your subconscious only. You must reconcile yourself with the environment around you. Come to comprehend you are under no threat. Aspect your milieu and scrutinize it in immeasurable facet. You will conclude you have naught to endure with apprehensive quintessence.”

These are the instructions given Susanna by the psychiatrist her parents have hired to render her “normal.” A bullied, anxious teen, Susanna has developed a coping mechanism of withdrawal deep into her own mind and soul, so effective that she is able to block out the horror of seeing her family perish in a burning car. The only survivor of the accident, she internalizes feelings of anger and guilt, while simultaneously reinforcing the mental process that separates her from her fears, via a deeply ingrained numb existence. In a state of shock after the car accident, her numbed state-of-mind leads her to an empty cabin on Cider Lane where she will meet Colin, a drifter who, from personal experience, has learned that Society’s dictates of “must” and “will” serve only to define—and confine—the human spirit in a power-hungry world, filled with selfish ambition, where those who refuse to conform find themselves on the fringes of humanity.

“Cider Lane” by author Mark Hayes is steeped in existential questions of “being.” What is our purpose? How does one define Right and Wrong? And who exactly is it that deems himself/herself worthy of standing in decree of Right and Wrong? And why do we listen when those who pass such judgments are as human as the rest of us? In this book, Mr. Hayes has given us much to think about as Susanna and Colin come to know one another and discover that transcendence of soul and mind can be dangerous in an automated atmosphere of “musts” and “wills.”

2 Responses to The Bad Review…